gorate interest in baseball is actively nurture more opportunities for kids like the JRW team. Theo is right.  And then some. Not only would MLB start developing the next generation of fans in the stands, it would immediately give more kids in difficult urban environments inspiring, safe places to put their time and energy.

And it would earn the League immense love within the communities where their teams play.Giving back to the cities that support their multimillion dollar businesses – by helping more kids play their sport and providing thoughtful additional resources like good information on nutrition and fitness – is the kind of virtuous circle that Make It Better loves to amplify.

If you can make this happen Theo – with just the Cubs or through all of MLB – we will help.

To learn more, please read this reprint of Theo’s interview with
Gordon Wittenmyer | Get In Touch: @GDubCub | gwittenmyer@suntimes.com of the Chicago Sun Times:

I wanted to re-post the fantastic interview with the Chicago Cubs President Theo Epstein and he view on the importance of the accomplishment by Jackie Robinson West on the the city of Chicago and the sport of baseball as a whole. 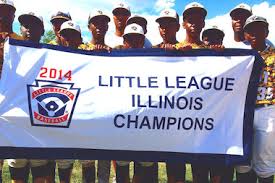 RePrint of Chicago Sun-Times Interview with Theo Epstein. I fully support his efforts and we will be involved in all initiatives moving forward.

Cubs president Theo Epstein, who joined other dignitaries and city officials at a rally honoring the Jackie Robinson West Little League champs at Millennium Park on Wednesday, sounded as caught up in the grip of their story as the rest of the city – and called it an “important moment” for professional baseball to heed.

“Just watching the whole city come together in support of the Jackie Robinson West Little League team was remarkable,” Epstein said. “I think anyone who watched that team play for an inning or two probably couldn’t help but watch the whole rest of the tournament. There was a sort of magnetic quality to that team.

“Probably the best thing to happen to the whole city of Chicago this summer – clearly from a baseball standpoint – was put together by 13-, 12-year-old kids from the South Side of Chicago.”

And he hopes that’s not lost on professional baseball officials who have spent years debating and brainstorming ways to reverse a generations-long trend of declining interest and participation in the sport among American kids, particularly African-Americans.

“At industry meetings and in lots of front offices around the game people ask the question how we can get young kids playing baseball again, especially in cities, especially in the inner city,” Epstein said. “And there’s nothing that a bunch of suits in a boardroom can do that will be as powerful as what those 12-year-old kids did to demonstrate how compelling the game of baseball can be, to make baseball cool again for young kids.”

MLB should take notice, he said.

“We really have to support them and capitalize on this moment and learn from what the Jackie Robinson West Little League has been doing effectively for four decades now—plus,” Epstein said. “Which is proactively go out to schools, find kids and sell them on the game of baseball, get them off the streets, get them learning from great mentors, playing together, learning about sportsmanship and competition and hard work and discipline and make them better people.

“The Jackie Robinson West Little League has made a positive impact on tens of thousands of kids over the years, and it’s really a model organization. We can all go to school on how they built their program.