After my mother’s recent surgery by Dr. Vincent Traynelis, Director of Neurosurgery Spine Service at Rush and the extraordinary care she received in the new hospital, I am prouder than ever about Make It Better‘s support for this event.
Mom’s surgery and post operative stay was in the new butterfly shaped, gold LEED certified, quiet, sunny, better-healing-guaranteed hospital that Rush opened in 2012. A growing body of research concludes that some hospital designs are more healing than others.  Count me a big believer of this, after my mom’s Rush experience!  The attitude of staff makes a big difference too. 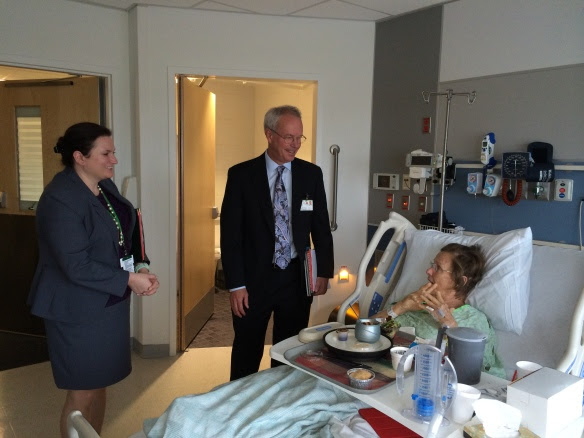 COO of Rush Peter Butler paying my mom a visit during her stay. The care was excellent.

I pray for more people to be able to receive the quality of care that mom was provided.  Raising money for the new neurological imaging equipment will make that happen.  I am particularly delighted that Make It Better is the media sponsor of The Women’s Board of Rush University Medical Center’s fashion show this year.
We love that three local boutiques are participating in this event too – Lake Forest Shop, Neapolitan

& Chalk Boutique
Please join me and Make It Better at the show or find other ways to support this important initiative too.
To learn more and to purchase tickets, visit: http://thefashionshow.org/

Make it Better has covered Rush University Medical Center Women’s Board Fashion show many times over the years in support of this amazing mission. First, we told you about how Marletta Darnall never imagined how important her volunteer work would be as a model when she was then diagnosed with cancer. We also covered the new look of the show a few years back, supporting the event and driving traffic for the great cause.
This year will be 88th Annual Rush Fashion Show, “IMAGINE”, to be held on Thursday, October 2nd.  Gloria Masterson (Fashion Show Chair) and Catherine King (Woman’s Board President) have worked tirelessly for over a year to bring a new vibe and hip aura to the longest running charity fashion show in Chicago.
Here’s the news they are reporting on the upcoming event;
This year will be completely different from years past as the show has been moved to the newly renovated Morgan Manufacturing, a pre-Chicago Fire building that will lend an edgy, industrial elegance to the ambiance of the night.
The Board reports; “This year the Woman’s Board has committed to raise $500,000 to support Intraoperative Imaging Technology that will allow the removal of complex brain tumors with greater accuracy and efficacy. Rush’s neurosurgeons already treat more neuro-oncology cases than any other team in the Chicago region and would be the first hospital within the city to employ this unique technology.”
I am excited for all that’s in store with this year’s show. Spread the word and we hope to see you there….

Yes, there really is a heroin epidemic on the North Shore.

Survivor Paula Nixon and her mother share their story, with the hopes of saving others.

Read their story and more by clicking here

Barbara Monsor, 90, to my right in the above photo, founded Mothers Trust to foster collaboration among Lake County social service programs to provide greater support for individual children.

Now – thanks to the network that Mothers Trust built – instead of treating each other as competitors, those social work programs really do work together and as a result, entire families are lifted up.

We’re honored and delighted to be able amplify the good that flowed from this mother’s heart.

Behind every accomplished man is a great mother. Case in point – Charlie and Dona-Lee Trotter.

Charlie Trotter was a visionary – his relentless pursuit of excellence put Chicago on the international culinary map. Trotter accomplished so much in his life. He was the first Chicago chef to create haute cuisine from locally sourced, organic food, the first to serve a Michelin starred vegetarian meal, the first to host his own tv show, and the first to put a table for diners in the kitchen.

His drive for excellence and mercurial temperment were balanced by a deep commitment to serve those who most needed it – students, homeless, police, firefighters and many others. The Charlie Trotter Culinary Education Foundation raised over $1 million for culinary school scholarships.
http://www.charlietrotters.com/about/foundation.asp

Those who know Charlie’s history will also know that his mother fostered, and quietly facilitated, the best of Charlie Trotter. The elegant but unassuming North Shore matron and mother of four encouraged Charlie to pursue his passion for cooking at a time when North Shore boys just didn’t do that. Dona-Lee and her husband (now deceased) hosted dinners in their home for friends so that Charlie could test recipes for his eponymous restaurant in development.

Dona-Lee didn’t just help her son get his start, she also worked the hostess stand at the restaurant Saturday nights until it closed. It’s easy to imagine that while working she quietly calmed angst caused by her son’s demanding drive for perfection, too.

Charlie died much to young; but thanks in part to his mother, he leaves behind a magnificent legacy.